We call application of botulinum toxin to the technique that has as purpose the treatment of the wrinkles that have appeared by contraction of the facial musculature. The technique involves the infiltration of the so-called botulinum toxin into certain muscles of the face, such as the depressor muscles of the eyebrow and the lateral portion of the orbicularis of the eyes, in order to paralyze them and make the fine cutaneous wrinkles generated by its contraction. Botulinum toxin is a substance that inhibits muscle contraction and has the effect of muscle paralysis. After a few months, the muscle regains its activity. Botulinum toxin injection is not a painless technique; Multiple intramuscular injections are associated with significant pain whose perception varies according to each patient. The use of a local anesthetic is optional depending on the characteristics of the patient. After each injection it is necessary to apply a gentle pressure on the muscle for a few minutes to avoid the appearance of bruises. The disappearance of the wrinkles is not immediate, but it takes a few days – from three days to a week – for the toxin to take effect and there is paralysis of the muscle whose contraction produces the wrinkles of that particular area. The effect of the paralysis is maximum after a few weeks and is disappearing in a variable period of time between three and six months. After this time the muscle recovers its normal activity and it is necessary to re-inject the botulinum toxin to paralyze it again. The repeated application of botulinum toxin, although not associated with definitive paralysis of the muscle, is associated with a longer duration of its effect. The doses of botulinum toxin used are so small that they do not produce complications in the rest of the organism. 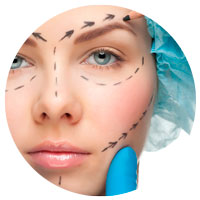